A memorial service was held for James Watt, founding Trustee of Iolanthe Midwifery at All Saints Church, Fulham on 9 May 2018. 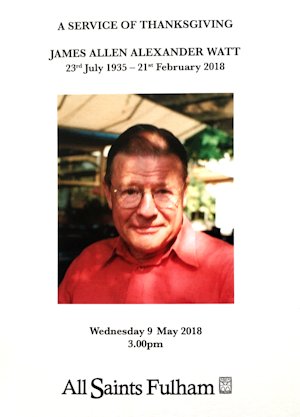 James was a founding Trustee of Iolanthe Midwifery Trust.  His link with Iolanthe was that he was the solicitor at the Central Midwives Board when the lease of the building they were occupying, Iolanthe House, was sold. It was decided that the net proceeds of the sale of the lease should be given to a charity. He was involved in the negotiations relating to the sale of Iolanthe House and the setting up of the new charity, the Iolanthe Trust. There was a lot of work behind the scenes to secure the proceeds for the charity as there were other interested parties. Once the negotiations were concluded, he was invited to become one of the founder Trustees, because of his knowledge of and interest in the profession of midwifery. He was not the Iolanthe’s solicitor but always provided measured advice when legal matters came up.

You can read more about James' involvement in an interview he gave in 2010. He was very pleased to have helped to establish the Trust and held with respect the work and opportunities given by grants to further and extend the education and research in midwifery.

Former Trustees who worked alongside him remember him with affection. Here are some of their comments:

James was a most reliable and enthusiastic trustee.  He always reminded us of the purpose of the trust and had a real sense of the valuable work that midwives do

He was such a gentleman in his manner and his principles, and was so committed to supporting the work of midwives.

He was always the same - very professional, an impeccable gentleman, very measured, very thoughtful and a delightful person to know.

James was such a lovely man and will be sorely missed.

We send our condolences to his widow, Patricia and all his children and grandchildren.

In this 2010 interview with James Watt, founding Trustee, we find out how the Iolanthe Midwifery Trust came to be established. James, as one…
See More
Back to top