This article reports on inequalities in maternal health, and highlights cultural competency training offered by the Sheffield Maternity Co-operative to help address this issue

Two years have passed since the disparity in maternal mortality between Black, Asian and ethnic minority women and white women hit the headlines. The shocking statistics contained in the MBRRACE-UK report, that Asian women were twice as likely to die compared to white women, and Black women five times more likely to die in pregnancy and childbirth than their white counterparts, led to government action and changes in NHS services to tackle this problem.

A number of NHS initiatives were introduced, such as the opening of perinatal service community hubs in order to identify potential problems sooner. Seventy-five percent of women from Black, Asian and ethnic minority communities should also benefit from a new continuity of care model throughout pregnancy, labour and the postnatal period.

Because of the time lag of several years between the data being collected and it being analysed and published by MBRRACE-UK, it will take time for the impact of these changes to be fully known and understood. In the meantime it is vital that issues of racial inequity in maternal health continue to be addressed to reduce the disparities, while making birth safer for all.

According to the most recent report (2020) by MBRRACE-UK:

Professor Marian Knight, lead author of the MBRRACE-UK report, stated that ‘addressing these inequalities among pregnant women and new mothers should be a priority.’

As Iolanthe Dora Opoku Award Winner, Sarah Esegbona-Adeigbe writes, "despite national policies and guidance on the importance of cultural qualities in maternity care, the National Maternity Review (2016) demonstrated that women still reported dissatisfaction with maternity services. Women from different backgrounds felt that health professionals needed to understand and respect their cultural and personal circumstances." (BJM, August 2018). Making assumptions about people based on their race can alienate women from accessing care, with barriers being formed when healthcare professionals show a lack of awareness and respect for another person’s culture.

It is at this point that we begin the conversation as to whether Cultural Competency education can improve outcomes for all, particularly those most at risk. Sarah Esegbona-Adeigbe continues "cultural competency is an ability to maximise sensitivity and minimise insensitivity in health services, which may increase engagement with antenatal care for black [African] women" (BJM, August 2018).

To address this need, Iolanthe Trustee Benash Nazmeen together with Hannah Thompson, a fellow midwife from Sheffield Maternity Cooperative, co-designed a workshop on Cultural Competency which is accredited by the RCM. An important part of this training consists of: 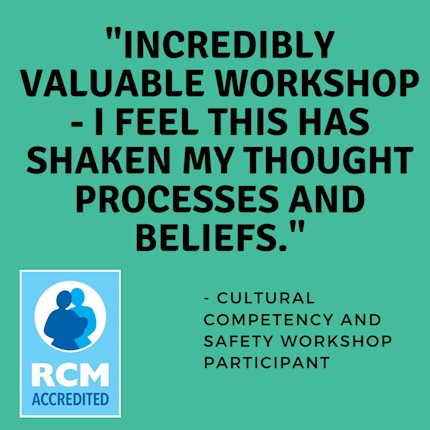 Benash points out that when, "Black, Asian, Minority Ethnic and Refugee (diverse) communities are labelled as difficult to engage, this can be due to inadequate understanding. A lack of knowledge and sensitivity concerning different cultures can affect midwives and healthcare professionals from developing the trust and communication with their birthing people which are necessary for effective care. Participants in the training are encouraged to distinguish between assumptions, myths and realities surrounding the communities they work with. They also gain an understanding of the need for active community engagement and mutual learning and identify concrete steps towards this engagement according to their professional role"

Feedback on the training has been very positive. As a result these sessions now run regularly and Trusts are beginning to invest in this training for their staff.

Participants in the February 2021 workshop gave positive feedback about the training:

Fantastic resources, will use them to continue my work and learning. Great mix of resources that were uplifting, troublesome, shaking, learning inducing. They make a difference.

Incredibly valuable workshop - I feel this has shaken my thought processes and beliefs. This will change my approach in clinical practice and in developing closer working links with communities.

The training is a positive step towards correcting the healthcare inequalities which have contributed to the disparity in maternal mortality rates between Black, Asian and ethnic minority women and white women. However, to increase the potential of Cultural Competency education, Iolanthe Trustee Benash Nazmeen suggests it should be, "mandatory training for all students at university." She also stresses the importance of educating management and policy makers who are often "blind to the barriers others face" by having "more representation of these communities at senior levels or at least advisory boards to understand barriers and enable changes to help overcome them."

To learn more about this Cultural Competency training or sign-up for a workshop, visit the Sheffield Maternity Cooperative website.

Cultural Competency training is merely a beginning in the journey to change the systems and structures that allow the disparities to continue, and should never be seen as a tick box exercise. This is work that should remain ongoing and it is wonderful to see one of our Iolanthe Trustees included in the number of Black and Brown people who are offering this important work.

Benash joined the Iolanthe Trustee team in March 2020. She is a practising midwife with a special interest in reducing health inequities.
See More

About Dora Opoku OBE (1948-2010), midwife and educationist, after whom the BAME Midwife and Student Awards are named
See More
Back to top