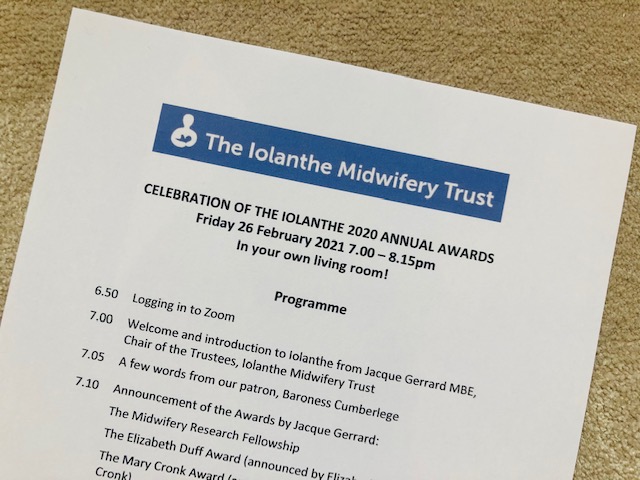 The annual Iolanthe Awards ceremony took place on Friday 26th February 2021 to present the delayed 2020 Awards. Despite being held virtually due to the Covid lockdown, it was an inspiring and often emotional event, well attended by Iolanthe Award winners, trustees, fundraisers and supporters.

In her introductory words, Iolanthe Patron Baroness Cumberlege said that she was proud that, despite pressure on NHS staff during the Covid-19 pandemic, the Iolanthe Award winners had said, "I can do more." She applauded the fact that, even when working under such difficult conditions, they still had the determination to advance maternity care.

There was a total of twelve Iolanthe Awards this year, including the Iolanthe Midwifery Research Fellowship Award given to Dr Cristina Fernandez Turienzo for her PhD research on continuity of care for women at risk of preterm birth in South London.

Iolanthe Chair Jacque Gerrard MBE explained that this had been a particularly outstanding week for Cristina: in addition to receiving her Iolanthe Award and receiving her PhD, she also gave birth to her son. Hearty congratulations on these happy events were wished to Cristina from all present.

Next came the presentation of the Elizabeth Duff Award, created to develop practice or knowledge that focuses on the implementation of relationship based midwifery care. The award was gratefully accepted by Nikola Duncan, who used it to set up an aromatherapy massage service for Whittington NHS Trust in North London.

The Mary Cronk Award was presented by Mary’s daughter to Evony Lynch. Having met Mary in person before her sad death in 2018, Evony said she was very proud to work on her own project to optimise birth, continuing Mary's passion and ideals.

Vice Chair and Lay Trustee Mars Lord then presented the Dora Opuku Awards which were created for Black, Asian and ethnic minority midwives in 2019 to fund midwifery projects leading to improvements in care. Midwife Radica Hardyal received her award, saying it would go a long way to supporting her vital research into maternal morbidity.

The Dora Opoku Student Award went to Gloria Olowabi-Agbongbon for her third-year elective placement in Mexico. Gloria thanked Iolanthe, saying it had been, ‘an amazing experience.’

Jean Davies herself presented the Iolanthe Award in her name to Dr Tomasina Stacey. The award is designed for individuals or teams working to address inequalities in maternal health in the UK. Tomasina's project aims to provide education to culturally and linguistically diverse communities on gestational diabetes through the medium of animation. Tomasina said, "I feel privileged to be a part of such a wonderful organisation as Iolanthe".

Claire thanked Iolanthe on behalf of herself and ‘the other midwives benefitting from the training the Iolanthe Award had funded in complementary therapies.’

Liz Murphy also gave a huge thank you to Iolanthe for her award, which enables training in human rights for those working in maternity care.

Mo Tabib felt that her Iolanthe Award went to everyone involved in the project it had funded; to bring relaxation techniques into mainstream midwifery education.

Jude Field said her Iolanthe Award to support her study day on sexual violence and women’s health had given her the confidence to reach out to others involved in this branch of maternity care.

Iolanthe Student Awards were then presented to Louise Downie and Stacey Malone.

Donors and fundraisers were also celebrated as Chair Jacque Gerrard thanked them for their essential contribution to Iolanthe’s work. Particular mention was given to fundraisers Maeve O’Connell and Iolanthe Trustee Grace Thomas for their efforts. Maeve, a midwifery lecturer, used her passion for yoga to raise funds through giving online yoga classes for midwives with donations to Iolanthe and Grace led her ‘amazing’ Cardiff University midwifery students who put on a conference which also raised funds for the Dora Opoku Awards.

Special mention was also given to Ross and Naomi Coniam who have raised an incredible £13,000 for Iolanthe. Naomi and Ross spoke movingly at the event about the sad loss of their newborn daughter Norah in 2018 and how Ross took on a series of challenge events to raise funds in her memory. Although the fundraising was titled ‘#Nine4Norah’ Ross plans to take on new fundraising challenges this year having completed the nine original challenge events.

Finally, the success of Iolanthe London Marathon Runners was celebrated. The 2020 virtual challenge meant running alone due to pandemic restrictions. Iolanthe Chair, Jacque, observed how much tougher this must have been for the runners, ‘without the cheers of the crowds to spur them on.’ A grateful Iolanthe thank you was given to the runners who completed the 2020 Virtual Marathon - Amanda Anderson, Amy Doherty, Donna Burns, Kristy Dunning, Paul Tully plus former Iolanthe Award winners Emily Brace and Dr Jo Welsh - as well as Iolanthe’s own Executive Director, Miranda Scanlon who sadly had to pull out of the marathon due to her training being interrupted by shielding restrictions.

The awards ended with a discussion by Trustees Mars Lord, Benash Nazmeen and Logan Van Lessen on cultural awareness and how Iolanthe continues to progress towards its goal of improving inclusion in midwifery.

Benash and Logan spoke of the difficulties they had experienced in being recognised and heard. Logan said that, before becoming an Iolanthe Trustee "I’d spent a lot of years in the NHS thinking I’d never be allowed on any Trust Board". Benash agreed that, saying that her appointment as an Iolanthe Trustee had given her the confidence to do things she knew she was capable of but hadn’t dared to previously. Mars added that the Iolanthe had put together an amazing group of midwifery professionals as a team of Trustees, "whom it is an honour to be a part of".

The awards closed with eager anticipation of the 2021 Iolanthe Awards, which are hoped to be held - in person - later on this year.