Helen, a midwife at Sheffield Teaching Hospitals NHS Foundation Trust, travelled to Toronto to present her research findings on discrimination of Romani woman at an international conference

I was delighted to be awarded an Iolanthe Award which enabled me to attend the International Confederation of Midwives (ICM) 31st Triennial Congress to present the findings of my mixed-method systematic review titled, “Discrimination in maternity care – Romani women’s experiences of maternity care in Europe”.

The ICM Triennial Congress is the largest global midwifery research forum, and was held between 18th and 22nd June 2017 in Toronto, Canada. It was attended by 4200 midwives, representing 116 Midwives Associations from 102 countries across every continent of the world. The title of this congress was “Midwives making a difference in the world”, and the congress aimed to strengthen professional associations of midwives throughout the world, as delegates returned to their local contexts better informed and newly inspired to address daily challenges and influence policy-making. 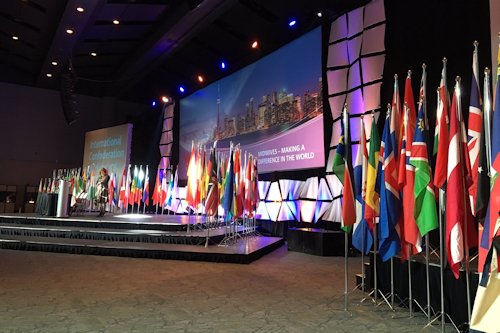 Presenting the findings of my study at the congress enabled me to raise the profile of childbearing Romani women, who suffer intersectional discrimination as a disadvantaged group within the most marginalised ethnic minority in Europe. It allowed me to use the platform of the congress to ensure that their voices and experiences are heard, to raise awareness amongst maternity health care providers and to bring a challenge to the status quo.

Every woman is entitled to the protection and fulfilment of their human rights throughout pregnancy, labour, birth and the postnatal period. This includes the right to be treated with kindness and respect, and to be free from discrimination.

It is crucial that the issues of mistreatment and discrimination in maternity care that are being experienced by Romani women across Europe are raised, discussed and addressed.

Networking with midwives from across the world was a truly inspiring and humbling experience. I have learnt so much from my global midwifery colleagues, and have been able to connect with other midwifery researchers whose work focuses on marginalised or disadvantaged populations, and am hopeful that these connections may progress to research collaborations in the future.